It was one of Noel Gallagher's important guitar, this ES-355 has become the symbol of Oasis' breakup. 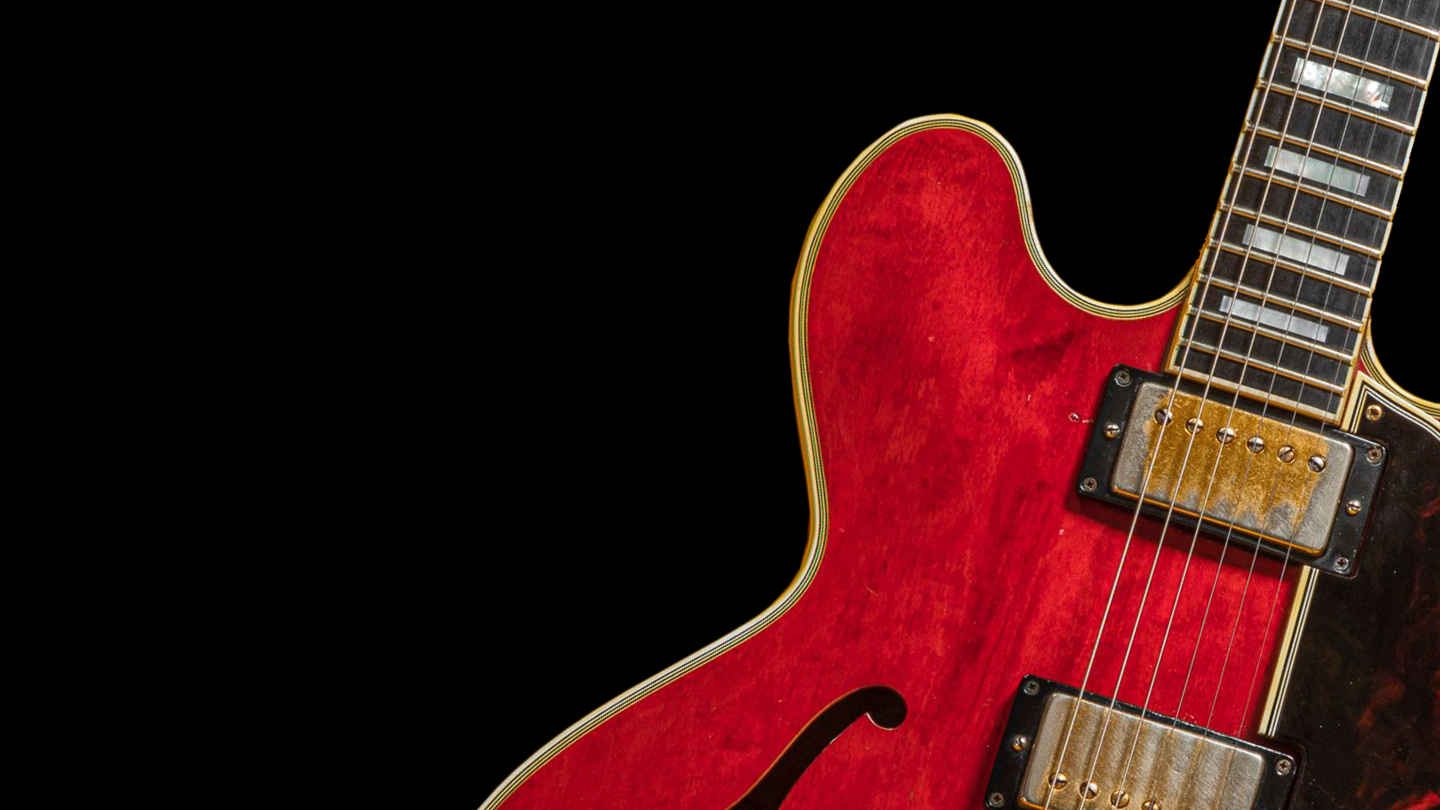 It was broken at Rock en Seine on August 28, 2009 following a violent argument between the two brothers, it was then restored in London by the talented luthier Philippe Dubreuille. 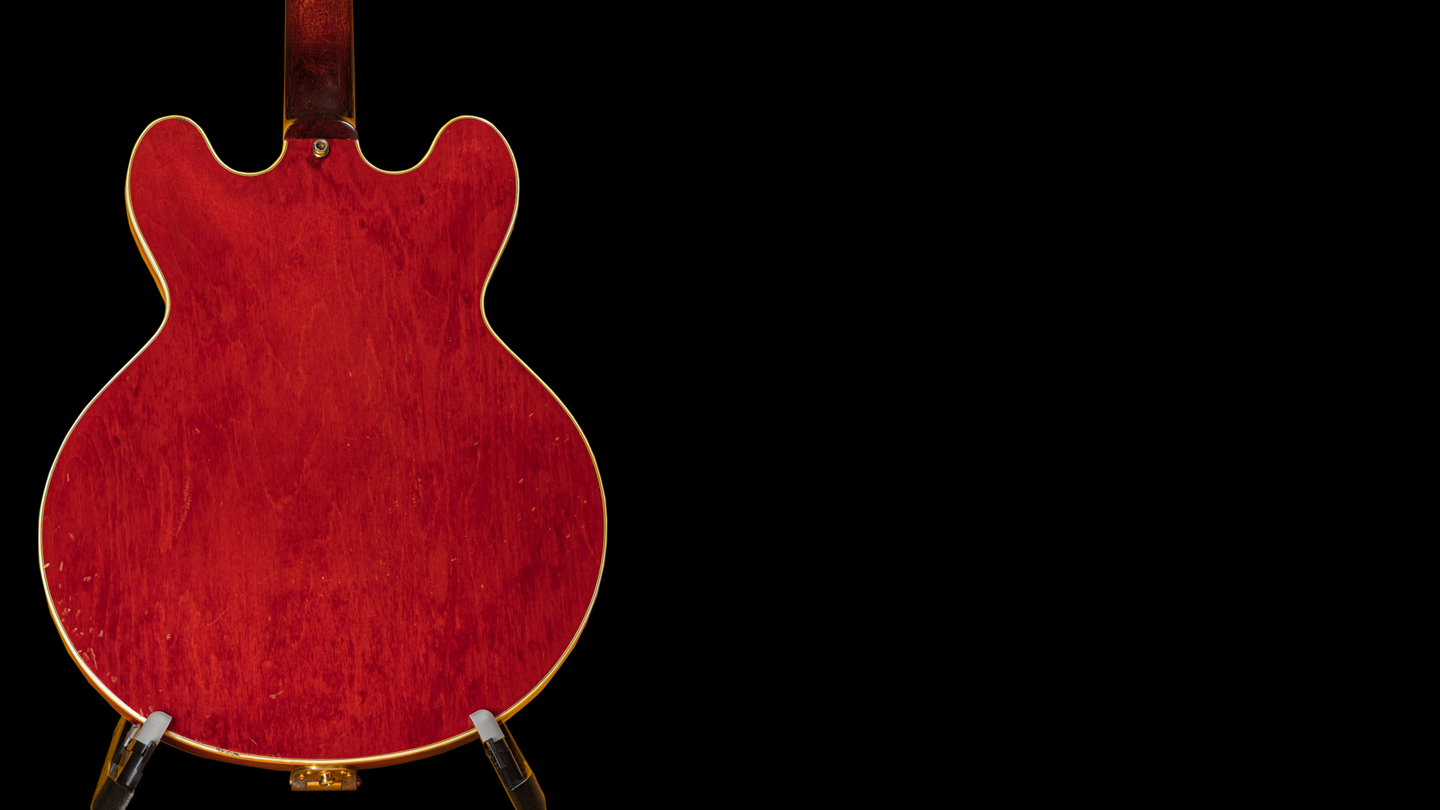 Discover the guitar that made the band's history. 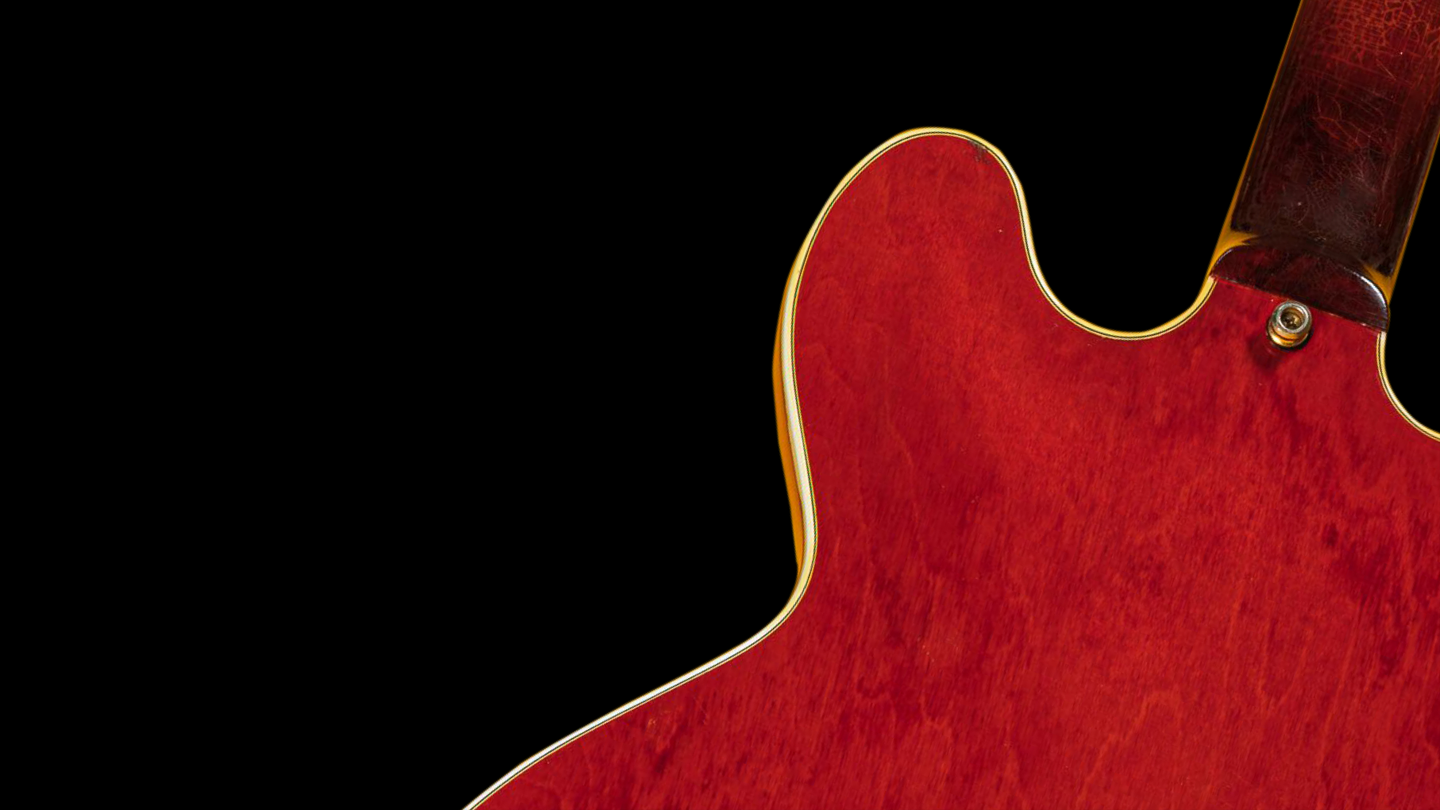 It was one of Noel Gallagher's important guitar, this ES-355 has become the symbol of Oasis' breakup.

It was broken at Rock en Seine on August 28, 2009 following a violent argument between the two brothers, it was then restored in London by the talented luthier Philippe Dubreuille.

Discover the guitar that made the band's history. 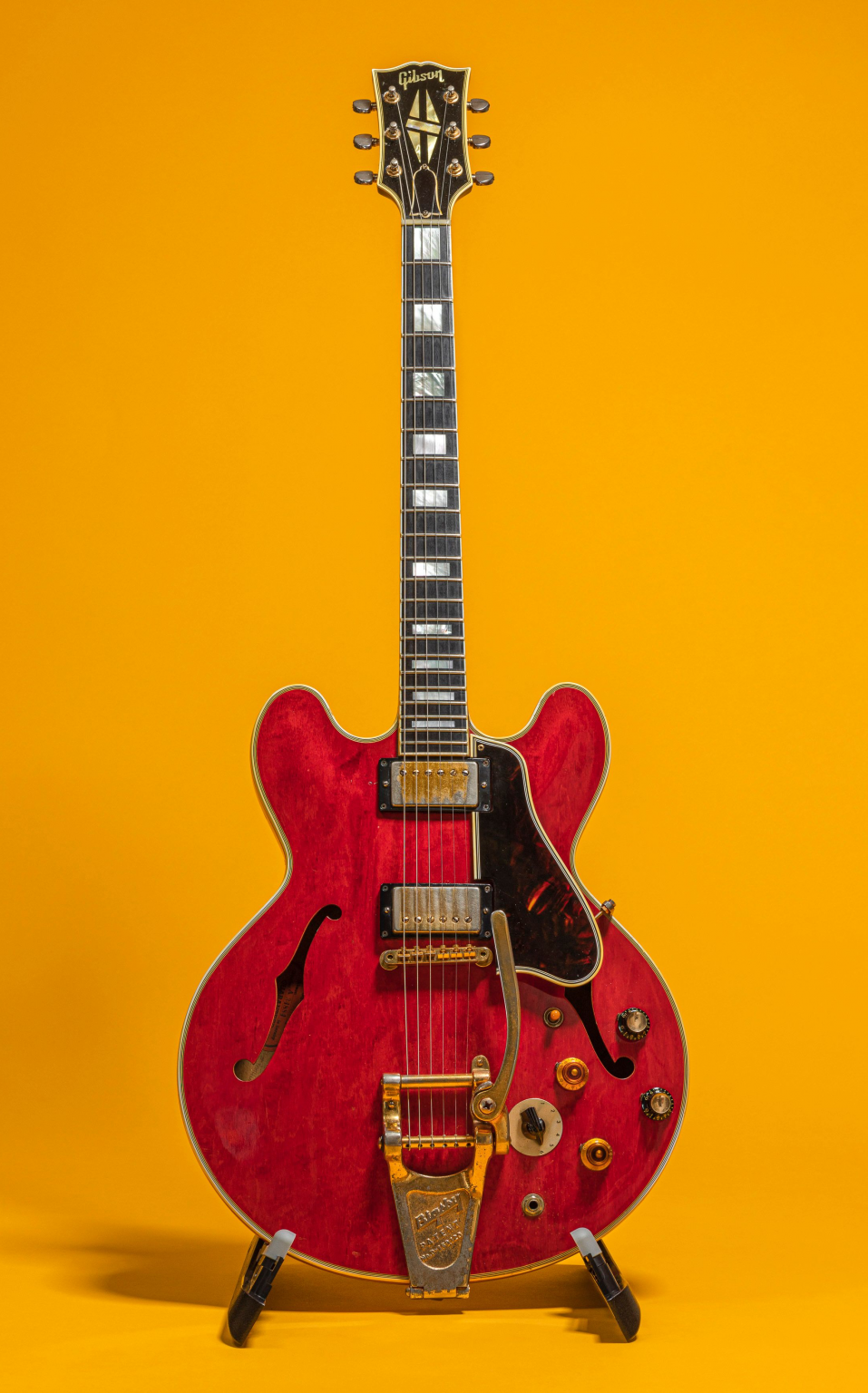 The exhibition will be in Drouot auction on Saturday, May 14 and Monday, May 16
Private consultation by appointment, please contact Arthur Perault

Do not hesitate to subscribe to the Newsletter to stay informed about this sale. 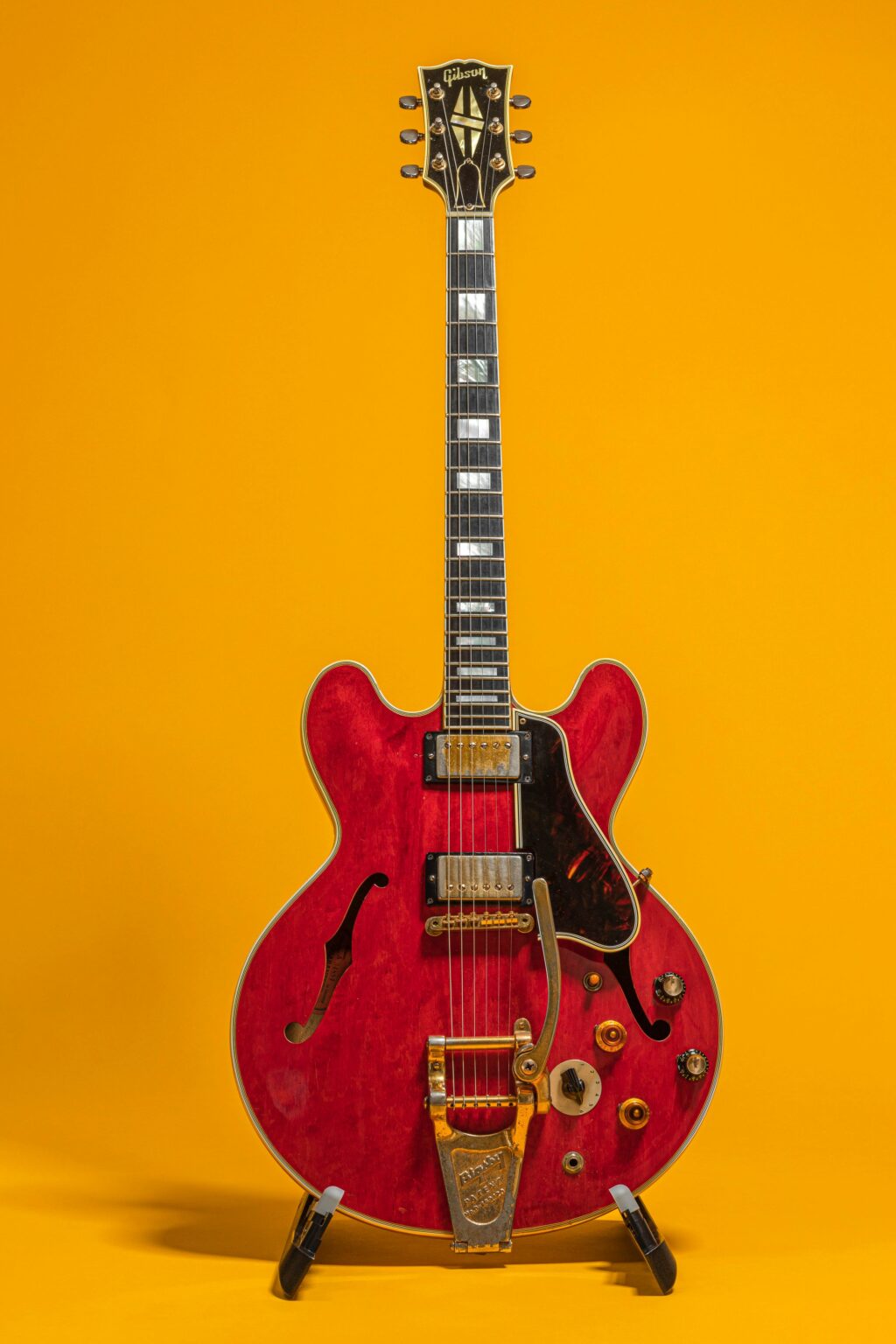 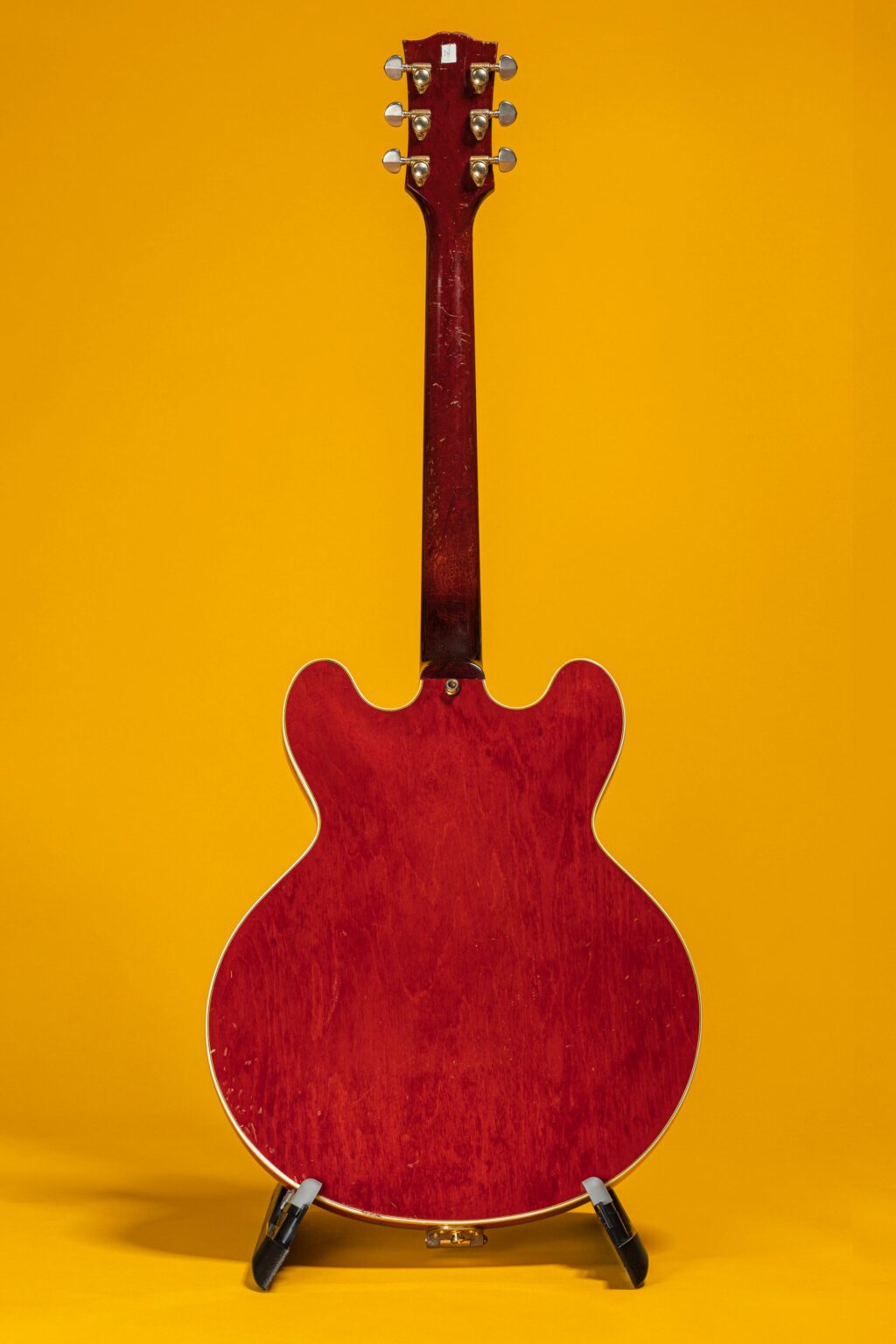 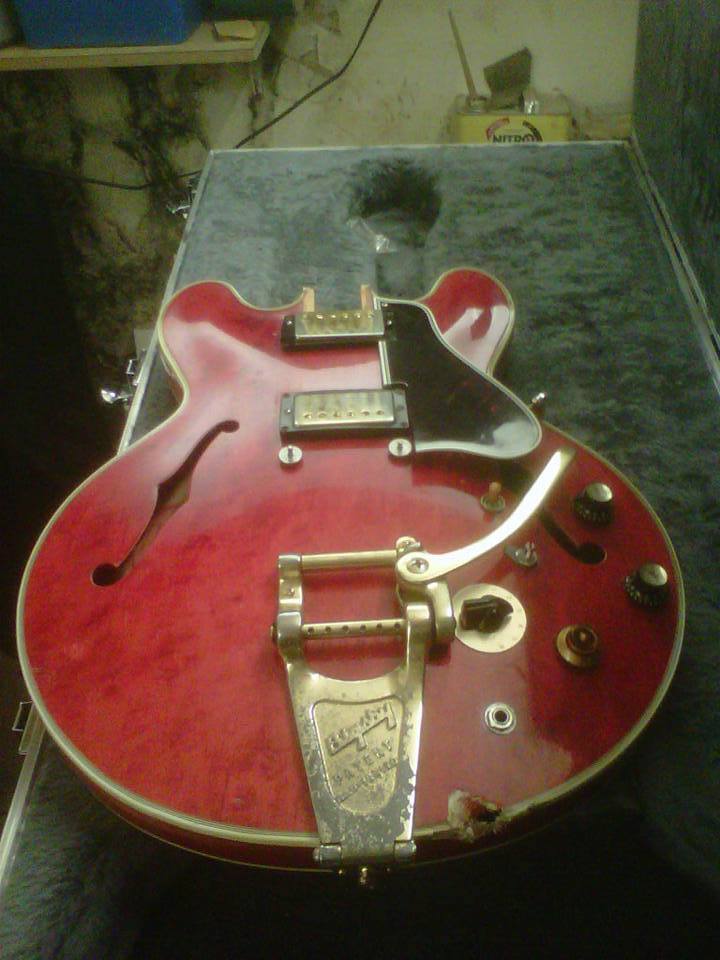 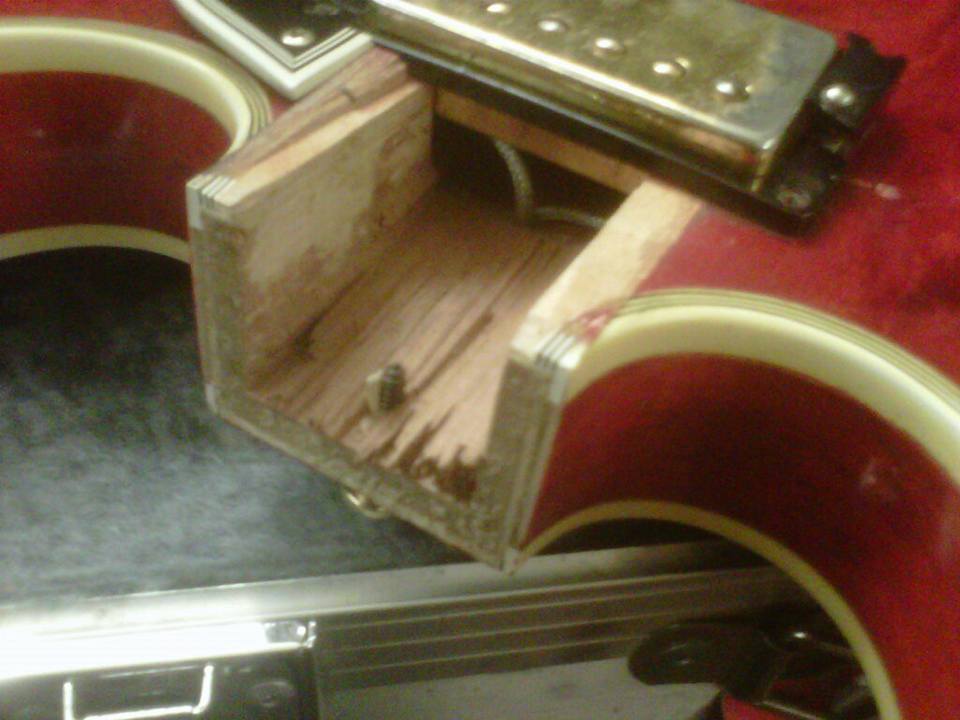 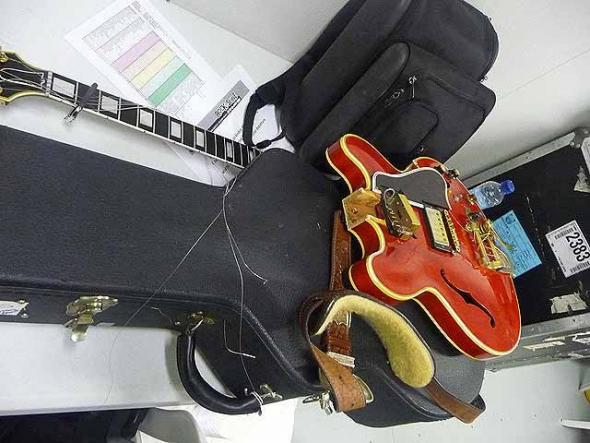 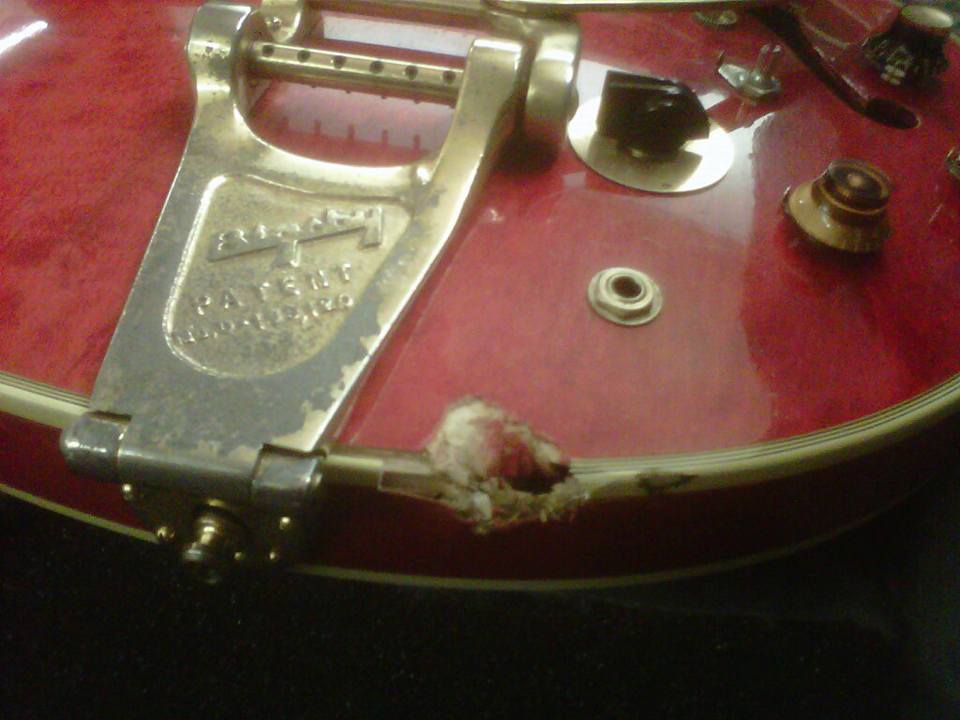 Somewhat reminiscent of the iconic Gibson ES-335, the beautiful ES-355 model made its appearance in November 1958 and officially hit stores in 1959. As an upgraded version of its older sister, it stands out with its ebony fingerboard inlaid with a mother of pearl "insert blocks" markers.

The head plating with its exploded diamond pattern, a sign of high distinction in the Gibson universe, is an important detail to note. L5 pickguard will be adapted to the model with a non-shortened version (covering beyond the bridge) and a fitted version which will appear in 1960.

Another distinctive sign, the ES-355 fitted as standard with vibrato, will be equipped with a Bigsby on its first year then a Maestro, followed with a Vibrola to get back to the Bigsby in1969. These high quality finishings, together with its golden fittings were not nearly enough to distinguish the ES 355 from its Thinline sisters and the model became quite rare.

Since March 1959 echoing the Gretsch and Rickenbacker trend, Gibson offered a stereo wiring and added a Varitone (a potentiometer with 6 presets of tone filters which, coupled with the 3-position selector, offered 18 pre-set of sound) the ES-355 TD SV (Thinline Dual-pickup Stereo Vari-tone).

The cabling options were quite advanced for its time and offered a high technical potential but above all a serious commercial argument. Note that these types of wiring could be sold separately and available on request: - $ 25 for stereo wiring/ - $ 40 for Vari-tone/ - $ 50 for stereo Vari-tone/ Officially produced until 1982, the ES-355 can sometimes be found in Gibson's limited series.

The Gibson ES-355 was Noel Gallagher's favorite instrument from 1996 to 2011. It was featured for the first time in the "Stand By me" music video from the album Be Here Now. “Usually, I just pick my 1960’ Gibson 355, that’s the basis for everything ... My 1960 ’ES-355 is the greatest guitar I ever played.” said Noel Gallagher in Premier Guitar Interview.

Throughout his creative process, the artist was looking for an expression tool which served his art best: Noel Gallagher found comfort and inspiration in this type of guitar.

Between 1996 and 1997, Noel purchased two ES-355 guitars. The first one was mainly used on stage: you can recognize it by its short pickguard. The other guitar, which is featured in the auction, has a longer pickguard and a black Truss rod cover. His ES-355 kept him company on stage for many years, and it certainly reminded him of the legendary Smiths’ guitarist Johnny Marr, an undisputed role model for the former Oasis composer.

As part of Noel Gallagher's guitar collection, this second ES-355 was used during the 2008 "Dig Out Your Soul" tour. Both Noel Gallagher and Gem Archer played this guitar and you can catch a sight of it in "Don't Look Back In Anger" music video tour.

This ES-355 symbolizes on its own the soul and the history of the group: smashed in the last storm of August 28, 2009 at the Rock en Seine festival, it embodies the intense and tumultuous career of one of the most iconic 90s group.

Perfectly restored in 2011 by Philippe Dubreuille, the guitar sports a "correct vintage" look and the wounds inflicted on the instrument have healed. Once the restoration work was carried out at Noel Gallagher’s request, the Oasis page turned (definitely maybe?) and our ES-355 TD returned to service with Noel Gallagher and the High Flying Birds for some time, with no hard feelings.

This ES-355 guitar will be put up for auction with a Noel Gallagher's signed certificate, in Paris on May.